Joseph Williams, serial number 2952952, served as a Private in Company M of the 807th Pioneer Infantry. He was inducted in June 1918, was discharged in July 1919, and died in December 1942. He is buried in the St. Augustine National Cemetery in Florida.

Joseph Williams was born on March 4, 1895 and lived in St. Augustine, Florida for much of his life. Before World War I, he worked as a cook. He registered for the draft on May 29, 1917 and was selected for serice on June 20, 1918. He was sent to train at Camp Dix in New Jersey. From September 4, 1918 to July 3, 1919 he served overseas as part of Compan M of the 807th Pioneer Infantry. This unit was responsible for technical assistance such as repairing and constructing roads, bridges, and railways. After the war ended, Williams was discharged on July 9, 1919 and returned home to St. Augustine. There, he resumed life as a cook, and married his wife, Pauline. Williams died on December 23, 1942. He is buried in the St. Augustine National Cemetery at Section D, Grave 18.

Originally created by James W. Dell and published by the Office of the Quartermaster General, Memorial Division. 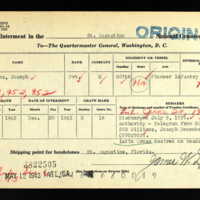