World War I List of Men Drafted for Service

A 1918 draft list for St. Augustine, Florida. Approximately 24 million men registered for the draft in 1917 and 1918. Those drafted reported to their local draft boards and then traveled to camp, where they would be trained for and inducted into the United States Army. To keep track of draftees and whether they reported for duty, each local board created forms. Form 1029 PMGO provided information such as name, order number, serial number, call number, primary industry, classification, report date, entrainment location, and the local board itself.

Joseph Williams (1895-1942) is listed with order number 147, serial number 1377, call number 642, and his primary industry as cook. The form also lists him as Classification I, meaning he was immediately eligible for service. He originally reported for induction at the St. Johns County Board in Florida, but he was transferred to Ithaca, New York for induction and Camp Dix in New Jersey for training.

Joseph Williams was born on March 4, 1895 and lived in St. Augustine, Florida for much of his life. Before World War I, he worked as a cook. He registered for the draft on May 29, 1917 and was selected for serice on June 20, 1918. He was sent to train at Camp Dix in New Jersey. From September 4, 1918 to July 3, 1919 he served overseas as part of Compan M of the 807th Pioneer Infantry. This unit was responsible for technical assistance such as repairing and constructing roads, bridges, and railways. After the war ended, Williams was discharged on July 9, 1919 and returned home to St. Augustine. There, he resumed life as a cook, and married his wife, Pauline. Williams died on December 23, 1942. He is buried in the St. Augustine National Cemetery at Section D, Grave 18.

Originally created and published by the Office of the Provost Marshal General, Selective Service System. 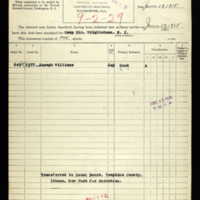