The abstract of military service for Carl Oscar Anderson (1893-1918). The card includes Anderson's name, age, race, serial number, place of birth, unit and ranks, death date and cause
and who was notified of his death. In this case, Anderson's father received the news.

Carl Oscar Anderson was born on March 3, 1893 in Orlando, Florida to parents Axel and Augusta. He was the third of five children. Around 1913, the family moved to Miami, Florida, where Anderson found work at Melrose Dairy. On June 5, 1917, he registered for the draft, and on October 6, 1917, he was inducted into the United States Army. Throughout his service, Anderson maintained the rank of private as he served in multiple units in his first eight months. Then, on June 20, 1918, he departed for France and became part of Company B of the 30th Infantry Regiment, 3rd Division. He and his unit likely participated in the Battle of Meuse-Argonne. On October 3, 1918, Anderson was killed in action, likely during the advance to Bois de Beuge. His legacy lives on, memorialized on the Lake Eola Tablet in downtown Orlando.

Originally created by P.C. Harris and published by the General Adjutant's Office.

The State Archives of Florida 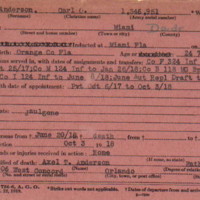 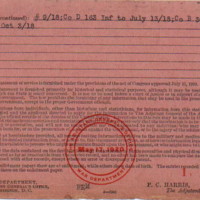