A newspaper article published in The Airscout's Snapshot on October 2, 1918. The column, entitled "S.O.L.", was devoted to “real, honest-to-gosh photographers.” A notable soldier mentioned in the article is James Normal Ball (1890-1940), who the columnist jokes "wishes to meet his wife in New York City" because she would possibly "like to meet some of [his] 'girl friends' in Rochester."

With the creation of the United States Army School of Aerial Photography at Kodak Park in Rochester, New York, commanding officer Captain Charles F. Betz approved the publication of The Airscout’s Snapshot as the school’s official paper. Produced weekly on Saturday by the soldier-students at Kodak Park, military officials believed the paper would contribute to the interest and efficiency of the school. For news columns, The Snapshot produced “short, pointed items, written without malice,” as every item became a ‘snapshot.’ All news published in the newspaper had to be censored by Captain Betz, as contributors could not submit questionable items. The newspaper ran from June 1, 1918 to December 4, 1918.

James Norman Ball was born in College Park, New York. After the death of his mother in 1899, Ball lived in an orphanage in Paterson, New Jersey. He eventually lived in the home of William and Sarah Speer in Paterson, where he worked as a stenographer by 1910. Soon after, Ball moved to Jacksonville, Florida, where he met and married Irene Elizabeth O’Hagan on June 21, 1914. During World War I, the Army inducted Ball on April 13, 1918, as he served at Army School of Aerial Photography in Rochester, New York. Aerial photography had become an important new tool for gathering military intelligence. Ball remained in Rochester during the duration of the war and afterwards until his honorable discharge on January 1, 1919. After the war, Ball returned to Florida, where he and his wife Irene raised three children: William Edward Ball, Irene Marguerite Ball, and James Thomas Ball. The Ball family eventually moved to Sebring, Barstow and Tampa, Florida, where James was active in the American Legion, the local Elks Lodge, and the Forty and Eight organizations. Ball died on May 22, 1940, in Tampa, and is buried in the Bay Pines National Cemetery in Saint Petersburg, Florida, in Section 4 Row 4 Site 16.

Originally created and published by The Airscout's Snapshot. 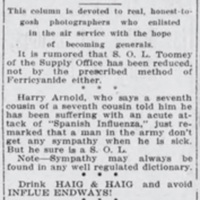