Veteran's Compensation Application for the Commonwealth of Pennsylvania

Veteran's Compensation Application for the Commonwealth of Pennsylvania

The Commonwealth of Pennsylvania’s Application Form for Veterans Compensation, which authorized the state to compensate veterans native to Pennsylvania at the time of their enlistment. The application includes name, current address, branch and location of service, place of birth, dependents (wife, children, parents), stations assignments, promotions, wounds, service overseas, and honorable discharge date.

A notable resident listed in this record is John T. Cowsert, who served as a soldier during the Mexican Border War and the First World War. He joined the United States Army as a member of the 12th Field Artillery for the 2nd Division. While deployed in France, he fought in the battles of Chateau-Thierry, Soissons, St. Mihiel, and the Meuse-Argonne. After armistice, John and the 2nd Division were part of the Army of Occupation that moved into Germany. For his service, John was awarded the Silver Star, two Croix de Guerres, and the Pershing Citation. After the war, John spent his life in St. Petersburg, Florida, with his wife, Irma. He worked for the Florida Power Corporation. Cowsert died on June 21, 1944, and was buried at Bay Pines National Cemetery Section 9, Row 2, Site 18. 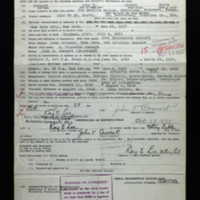