Affidavit of the Master or Commanding Officer, or First or Second Officer

Affidavit of the Master or Commanding Officer, or First or Second Officer

The affidavit of the master or commanding officer, or first or second officer, for the SS Lake Felicity, signed by Leo Davis as the master of the ship on January 22, 1920. On this voyage, the ship sailed from Matanzas, Cuba, to New York, New York. The cargo ship was 250 feet long and powered by steam. Starting in 1918, the Detroit Ship Building Company began construction of the ship for Great Britain under the name SS War Lynx. However, the war ended before construction was finished. The ship was purchased by the United States and, upon completion, renamed the SS Lake Felicity. From 1925 to 1934, the ship was renamed yet again as the SS Norte for Argentina, and finally from 1934 to 1943 as the SS Tiete for Brazil. In 1944, the ship sank after a collision.

A notable crewmember was Leo Rosser Davis (1880-1951). Born in Tallahassee, Florida, to James and Nora Davis, Leo was the oldest of four children. On June 1, 1918, at the age of thirty-eight, Leo received a commission as a Lieutenant in the United States Navy Reserve. He reported to the Naval Auxiliary Reserve in New York on June 3, 1918. Then, on June 22, he began his service aboard the USS Lykens (SP-876/AT-56). By late July, Leo commanded the ship, which operated in the northern Atlantic, off the coast of New England. Leo continued to command the ship through the end of World War I. On April 18, 1919, he was discharged and returned to Florida. After having spent so much time at sea, Leo earned the title of a master mariner. He sailed the civilian cargo ship SS Lake Felicity, a 250-foot steam-powered ship. On at least three occasions in 1919 and 1920, he commanded this ship and sailed between New Orleans, Louisiana, various Caribbean islands, and New York. On March 20, 1951, Leo passed away in the Bay Pines Hospital after spending nearly his entire life in the St. Petersburg area. He was survived by his wife Anna, his stepson William, his brothers Claude and Herbert, and his mother Nora. Leo is buried in Bay Pines National Cemetery at Section 16, Row 6, Site 11.

Originally created by Leo Rosser Davis and published by the United States Department of Labor. 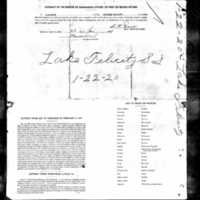