The draft registration card for Bert Collier Davison (1892-1945). The card contains the demographic information for the soldier including name, age, home address, date of birth, place of birth, race, citizenship, trade or occupation, number of dependents, whether tall, medium, or short, slender, medium, or stout, eye and hair color, whether bald, and disabilities. World War I draft registration cards were completed by approximately 24 million men living in the U.S. in 1917 and 1918. Goins registered for the draft on June 5, 1917.

Bert Collier Davison was born on July 28, 1890, in Atlanta, Georgia, to Anna Davison and Robert Davison. At the age of nineteen, Davison started a career in pharmaceutical sales. He registered for the draft on June 5, 1917, and was inducted into the United States Army on June 26, 1918. He left from France aboard the USS Zeelandia on September 8, 1917, and was assigned to the Administrative Labor Army Service Corps of the Quartermaster Corps. Near the end of the war, he earned a promotion to Corporal on October 1, 1918. Davison was tasked to stay with the Third Army during the occupation of the Rhineland after the war officially ended and did not depart from Europe until October 19, 1919. The work he did during the occupation earned Davison a promotion to Sergeant on May 20, 1919. He was honorably discharged on November 5, 1919. After returning home, Davison continued his work in pharmaceutical sales at Budd’s Pharmacy in St. Petersburg, Florida. He opened his own pharmacy in 1926. In April of the same year, Davison married Johanna Horstmann, a German woman. In August 1929, Davison shifted trades from pharmaceuticals to tires when he became the manager of a Firestone tire store and filling station. In 1930, Davison moved from Firestone to Goodrich tires. He had major surgery at the Mound Park Hospital in St. Petersburg in July 1930, followed by six weeks of recovery. Ultimately, his health issues would cause him to retire early at the age of forty-seven in early 1940. Davison died in 1945 from what his wife called “a long illness.” 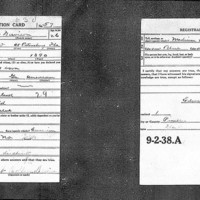