Estevan Rojo placing a wooden panel while building a house. An unidentified man stands behind him, holding the end of the piece of wood. A first generation American, Rojo joined the United States Army during the First World War. He served as a wagoner in the 119th Field Artillery. During the war, the 119th supported the 32nd and 79th Divisions, as well as others when needed. While deployed to France, he fought in the battles of Chateau-Thierry and the Meuse-Argonne. After the war, Rojo returned home and worked as a builder and a painter. He died on April 25, 1961, and was buried at Bay Pines National Cemetery Section 36, Row 3, Site 9.

Copyright to this resource is held by the Rojo Family and is provided here by RICHES for educational purposes only. 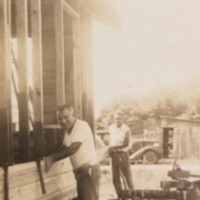