A program for the Orlando Gay Chorus' concert, "Pride 5", on June 11 &
12, 1994, at the Anne Giles Densch-Civic Theater Complex in Orlando, Florida. The program includes short biographies on Music Director Dr. Charles Callahan and Accompanist Ken Thompson, II, a brief history of the GALA Choruses, program notes, an outline of the show's itinerary, a list of chorus members and how to become a contributor. It also contains an advertisement for the Parliament House Orlando, a contribution form, and a calendar for the Second Stage 1994-1995 season. 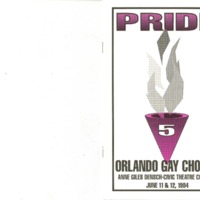 All the Things You Are; Anne Giles Densch; Brothers and Sisters; Charles Callahan; Civic Theater Complex; diversity; GALA Choruses; Hit Me with a Hot Note; How Can I Keep from Singing; Imagining You; Kenion A. "Ken" Thompson, II; OGC; Orlando Gay Chorus; Our Time; Paul R. Ericson Memorial Fund; Pride 5; Showboat; Stouthearted Men; The King and I; Two Patriotic Airs; What'll I Do?; You Are My Star