Divas on the Half Shell, Tupperware Center Theater

A program for the Orlando Gay Chorus' concert, "Divas on the Half Shell", on March 22, 1997, at the Tupperware Center Theater in Kissimmee, Florida. The program includes short biographies on the Music Director Aubrey Connelly, the narrator Jack Harell and the Accompanist Kathy Slage, program notes, an outline of the show's itinerary, a list of chorus members and contributors, and a history of GALA Choruses. It also includes brief biographies of the performers: Anne C. Smith, George Timothy "Carmella Mercella Gracia" Reed, Jacqueline Jones, Dennis "Denise Russell" Wertz, Bryce Ward, and Kathy Spring. 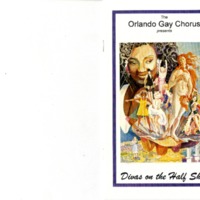