A program for the Orlando Gay Chorus' concert, "'Tis the Season... There's No Place Like Home", on December 13 &
14, 1997, at the Anne Giles Densch-Civic Theater Complex in Orlando, Florida, Florida. The program includes short biographies on the Music Director Aubrey Connelly, the guest narrator Jack Harell and the Accompanist Kathy Slage, program notes, an outline of the show's itinerary, a list of chorus members and contributors, and a history of GALA Choruses. It also features a holiday greeting from the President of the Orlando Gay Chorus, Tommy Robinson.

12-page black and white program with a colored front cover 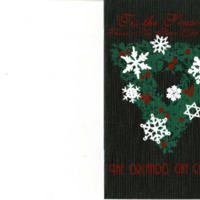