OGC… By Request, The Club at Firestone

A program for the Orlando Gay Chorus' concert, "Orlando Gay Chorus... By Request", on March 21 &
22, 1998, at the Club At Firestone in Orlando, Florida. The program includes short biographies on the Music Director Aubrey Connelly and the Accompanist Kathy Slage, program notes, an outline of the show's itinerary, a list of chorus members and contributors, and a brief history of GALA Choruses. It also features a message from the President of the Orlando Gay Chorus, Tommy Robinson.

The Club at Firestone, Orlando, Florida 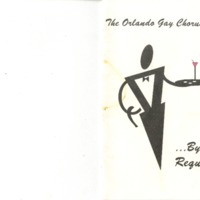 Aubrey Connelly; Bethlehem; diversity; Finlandia; Gershwin Medley; GLBT; God Help the Outcast; Hanky Panky; Hit Me with a Hot Note; I Have a Love; I Shall Miss Loving You; I'm Going to Go Back There Someday; Kathy Slage; LGBT; LGBTQ+; Love Don't Need a Reason; Marry Us; OGC... By Request; One Hand, One Heart; Paul R. Ericson Memorial Fund; Sing Out Loud; Some of My Best Friends Are Straight; That's My Life; The Condom Song; The Way We Were; Tommy Robinson; You Are My Star