A program for the Orlando Gay Chorus' concert, "Director's Choice", on March 24 &
25, 2001, at the Darden Theater at the Orlando Science Center in Orlando, Florida. The program includes short biographies on the Director Terry Thomas and the Accompanists Genoa Minga and Tim Hanes, program notes, an outline of the show's itinerary, a list of chorus members and contributors, and a history of GALA Choruses. It also includes two ticket stubs. 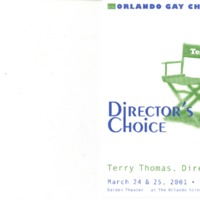 A Commentary on the Baritones/ Basses; A Lot of Livin' To Do; A Quiet Thing; All the Things You Are; Children Will Listen; Darden Theater; Director's Choice; diversity; Drama Queen; Everytime I Feel the Spirit; GALA Choruses; Genoa Minga; GLBT; How High the Moon; Judy, Judy, Judy; LGBT; LGBTQ+; Maybe This Time; Never Ever; OGC; On My Own; Orlando Gay Chorus; Orlando Science Center; Paul R. Ericson Memorial Fund; Sunday; Terry Thomas; Tim Hanes; When I Fall In Love; You Are My Star; Your Man