Mermaid Rita King feeding a fish underwater. In one hand she is holding food and the other hand is holding an air hose. She is kneeling on the spring floor. Photograph taken in the 1960s. 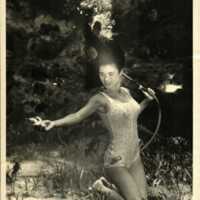