Newspaper article on three construction companies' contract bids to rebuild the Sanford State Farmers' Market after it was destroyed by fire in 1957. Bids ranged from approximately $209,000 to $214,000.

Farmers' Market Bids Open Today
WINTER HAVEN--Bids from three construction firms were opened today for building a new farmers' market at Sanford to replace the structure which burned down earlier this year.
L. H. Lewis, director of sate farmers' markets, said at headquarters here that the bids were so close they will have to be examined carefully before it is determined which will be accepted.
The bids came from the Arnold Construction Co. of Fort Pierce, Gregg, Gibson and Gregg of Leesburg, and the Mann Construction Co. of Orlando. They ranged from a low of $209,887 from the Leesburg firm to a high of $213,973 from Mann.
The bids were for construction of a steel and concrete type building 80 by 480 feet. There were also alternate bids for a "triple-A" type building.
Lewis named an "examination and interview" committee to study the bids and talk with officials of the three firms. The committee will be composed of himself, Tom C. Skinner, executive[?] agricultural engineer at he University of Florida, and Frank G. George, consulting architect for the project. 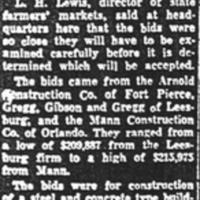