Commencement program for Seminole High School's Class of 1934. The program includes a list the graduating seniors, credits for the award ceremony, credits for the baccalaureate sermon, and information on the student government, class features, and class song. The class president and vice-president for the Class of 1934 were Charles Palmer and Dorothy Marshall, respectively. 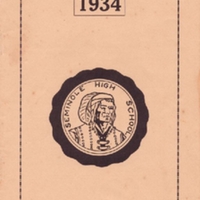