A newspaper articleon the tobacco and leather industries in Florida. The article was written by C. D. Leffler, President of the Young Men's Business League, and published by Manufacturers Record: A Weekly Southern Industrial Railroad and Financial Newspaper. According to the article, Florida had "become a great cigar and tobacco centre, especially for [C]lear Havana goods," a cigar brand. The cigar industry was first brought to Florida by Cuban immigrants in the 1830s and became one of the most important industries in the Southeast by the last quarter of the 19th century, with Tampa serving as the cigar manufacturing center in the state. In the late 1800s, cigar factories began to appear in various other Florida cities, such as Jacksonville and Tallahassee. Cigar manufacturing first appeared in Sanford sometime between 1909 and 1912. The Florida cigar industry came to its peak in the first quarter of the 20th century, but then declined during the Great Depression and World War II, due to the accumulation of labor union conflicts over the years, the mechanization of production, and changing consumer demands. The industry was revitalized during the 1950s as production soared, despite the decline of the number of workers. Following the Cuban Revolution of the late 1950s and the U.S. embargo on Cuban products in 1962, the Florida cigar industry again declined. The Cuban embargo included tobacco, thus forcing American cigar rollers to begin using Dominican tobacco.

The article also discusses prospects for the leather industry in Florida, which had a virtually unlimited supply of palmetto, a root plant commonly used in the tanning process. Lastly, Leffler briefly cites the starch, tapioca, and artesian water industries.

Copyright to this resource is held by the Manufacturers Record: A Weekly Southern Industrial Railroad and Financial Newspaper and is provided here by RICHES of Central Florida for educational purposes only.

Tobacco and Leather.
YOUNG MEN'S BUSINESS LEAGUE,
SANFORD, FLA., JUNE 21.
Florida has become a great cigar and tobacco centre, especially for clear Havana goods. This industry is receiving more attention at present than anything else. Every town of any importance has one or more factories, but there are other lines that we are beginning to wake up to, and which promise a great deal.
The tanning business has bright prospects. We have an unlimited supply of saw palmetto, the roots of which make splendid tannin. This material can be had for $2 per ton, against $12 to $14 for oak or hemlock. A German company started a tan-yard here about a year ago, and has twice increased the capacity of the plant, and is again considering putting in additional machinery. In conversation with one of these gentlemen recently he said that he had been in the business all his life, and that the palmetto root was a good or better than any other material for tanning, and that there was no comparison as to price. The supply of hides is large, this being a great cattle country.
Another industry that can be made a success in this section is the manufacture of starch and tapioca from the cassava root. This plant will produce fifteen to twenty tons per acre on average soil without fertilizer; it grows the year round, and only requires replanting every third or fourth year.
There is an abundant supply of pure artesian water to be had here, and labor and fuel are cheap.
C. D. LEFFLER, President. 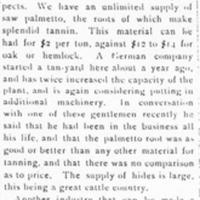