New Cigar Factory: Sanford Will Be Center for Clear Havana Cigars in Future

New Cigar Factory: Sanford Will Be Center for Clear Havana Cigars in Future

A newspaper article about Florida-Cuba Cigar Company, a new cigar factory coming to Sanford, Florida, in 1919. The article describes the strategic location of the city for the growing cigar industry. The new factory was located on the second floor of Bishop Block, located at 301-309 East First Street in Downtown Sanford, and has churned out new cigar brands, such as the Tampa Trail, the Peg, the Some Brush, and others.

The cigar industry was first brought to Florida by Cuban immigrants in the 1830s and became one of the most important industries in the Southeast by the last quarter of the 19th century, with Tampa serving as the cigar manufacturing center in the state. In the late 1800s, cigar factories began to appear in various other Florida cities, such as Jacksonville and Tallahassee. Cigar manufacturing first appeared in Sanford sometime between 1909 and 1912. The Florida cigar industry came to its peak in the first quarter of the 20th century, but then declined during the Great Depression and World War II, due to the accumulation of labor union conflicts over the years, the mechanization of production, and changing consumer demands. The industry was revitalized during the 1950s as production soared, despite the decline of the number of workers. Following the Cuban Revolution of the late 1950s and the U.S. embargo on Cuban products in 1962, the Florida cigar industry again declined. The Cuban embargo included tobacco, thus forcing American cigar rollers to begin using Dominican tobacco.

Sanford Will Be Center For Clear Havana Cigars in Future

Sanford is well situated for factories of all kinds being in the center of the state at the head of navigation and with superior railroad facilities. Among the many industries located here in the past few months is another cigar factory, known as the Florida-Cuba Cigar Co. It is composed of home people and was proposed and started by local cigar manufacturers who have been here for some time in the J. J. Mauser factory, men who thoroughly understand the manufacture of Clear Havana cigars and men who believe in Sanford as the logical center for a big trade in cigars.
Rex Packard, president, Louis Miller , secretary and treasurer, Jas Johnson, general manager, E. E. Shell as foreman give the factory the promise of success from the start. Among those interested as stockholders are several other local business men and also those veteran cigar manufacturers, J. Patton, Edward Winters, Louis Miller and C. E. E. Shell.
The factory is ideally situated in the second floor of the Bishop block where there is ample room and light and the factory is a busy place just now with the workmen turning out the new brands such as the Tampa Trail, the Peg, the Some Brush and other names that are destined to become famous with the consumers of good smoke.
These cigars will be placed upon the market at once and will prove prime favorites from the start. Thus Sanford gains another cigar factory and we are destined to become a great cigar center in the future where climate and location are ideal for the manufacture of these delectable smokes. 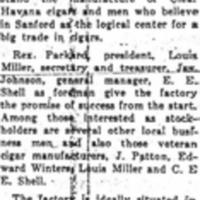