An original letter of correspondence between Sydney Octavious Chase and Cary D. Landis, Esq. Topics discussed in the letter include a Ku Klux Klan demonstration in Sanford, rumors that the H. R. Stevens campaign was mobilizing African-American voters, and a satchel found in front of the Chase & Company office the evening of the demonstration.

Chase & Company was established in 1884 by brothers Sydney Octavius Chase and Joshua Coffin Chase. The company sold insurance and later invested in storage facilities and fertilizer sales. Chase & Company was known mainly for its agricultural interests and maintained a series of citrus groves throughout Central Florida. The company was based out of Sanford and became one of the city's largest employers into the early twentieth century. Randall Chase joined in the family business soon after his brother, Sydney Chase, Jr., did in 1922. Randall became the president of Chase & Company from 1948-1965.

The Ku Klux Klan was first organized by ex-Confederate soldiers in in Tennessee in 1866, but was disbanded by the first Imperial Wizard Nathan Bedford Forest in 1869 in order to avoid government sanctions. The second Klan was reformed in 1915 by William J. Simmons. Although the KKK deteriorated nationally during the Great Depression, it still flourished in Florida until a $685,000 lien was filed against the national Klan in 1944 for back taxes from the 1920s. In 1948, Dr. Samuel Green of Atlanta revived the KKK in Georgia, which spread to Florida and other states. In 1951, the Florida KKK responded violently to the activities of Harry Tyson Moore's Progressive Voters' League and the National Association for the Advancement of Colored People (NAACP) during a period dubbed "The Florida Terror." As of the early 2000s, the Florida KKK remained to be on of the more active Klans in the country.

SANFORD, Dec. 5.-(Special.)- Knights of the Ku Klux Klan, in white robes and carrying torch-lights, paraded silently and impressively through the main business section of Sanford tonight.
Some of the marchers carried signs of warning against wrong-doers.
There were 120 klansmen in the parade, which was witnessed by several thousand persons.

Last evening Sanford was visited by a bunch of KuKlux performers from Volusia County. Some of our local men no doubt were mixed in with them. The reason I state they were from Volusia Co. was I found a package that belonged to one of the High Mucky-Mucks that dropped from an automobile in front of my office, and I found it there and carried it in the house. It contained a bunch of KuKlux secrets, and belonged to a man named barber, who came from Bunnell.

It has been rather difficult for me to figure out why they should have a demonstration on the eve of our city election. There is a good deal of talk by the Lake supporters of the Stevens party attempting to vote a large bunch of negroes. This was all a mistake, s there has been no negro registration, as far as the writer knows in the last two years; in other words, all negro registrations were made prior to the present form of government, and when simon-pure[?] Democrats were scrapping for the city job they all solicited negro votes.

Some of the banners that this bunch carried last night bore the fellowing; "We believe in White Supremacy"; "Beware; judges and jury do your duty," and similar mottoes. I thought possibly the demonstration was for Mr. DeCottes' benefit, although I may be mistaken.

The satchel that was fround in front of our office was left in the office last evening, and after the writer had retired, some time around midnight, the phone rang, and I learned the party from Bunnell wanted his grip. He had discovered that he had lost it, and having seen some of the men who were in the office at the time, he was able to trace me up. At first I had a one hundred per cent Ku Klux Klan sensation, of being watched on, but found some friends in waiting for me at the door, and ernt down to the office and restored the lost property to the owner.

I do not recall Barber's initials. Do you know any Barber in that region? 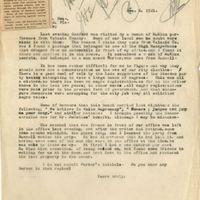