Plat of Survey for Pilgrim Black

Plat of Survey for Pilgrim Black

Plat of survey for Pilgrim Black (1905-2002). This document certifies that V. K. Smith, a land surveyor for A. C. Doudney Surveyors, Inc., completed the location survey of Pilgrim Black's property on the corner of East Tenth Street and South Bay Avenue. The map surveys one of the homes built and owned by Maggie Benjamin Black (ca.1870-ca.1934) in the 1800s, who was the daughter of former slaves, Isaac Benjamin and Roseanna Benjamin, and the sister of Nathan Benjamin, Pledge Benjamin, Sam Benjamin, Louis Benjamin, Chainey Benjamin, Lara Benjamin, Melvina Benjamin, and Katie Benjamin. Maggie and her husband Harry Black (d. 1911) were the parents of parents of Leckward Black, Mustar Black, Malachi Black, Leatha Black Walker (1889-1976), Pilgrim Black (1905-2002), Margaret Black Jones (1889-1976), and Harriett Black Lawson. They were also the grandparents of David Harry Black (1929-2012), Vivian Louise Black (1940- ), Lula Yvonne Black (1942- ), Charles Samuel Black (1945- ), Pilgrim Black Jr. (ca.1947- ), and Patricia Ann Black (1956- ). The Black family migrated from South Carolina during the 19th century. In 1911, Harry owned a grocery store at 206 South Sanford Avenue. One day, he came home from work with pneumonia and passed away shortly thereafter. Pilgrim was nine years old when his father passed away.

Harry and Maggie had their wood house built in the 1880s or 1890s at the corner of East 25th Street and South Sanford Avenue. Their house served as a meeting place for many of the elite members of the African-American community in Sanford. At one point, a business had asked to purchase the six acres of land that the Black family owned. Maggie agreed to sell the land, under the condition that the lumber could be reused to build houses on East Tenth Street. Maggie built a large home for herself and her children and several three-room houses for rental. She later gave the houses to Pilgrim and two of her grandsons, who made several additions to convert them into homes for their families.

Pilgrim was born in 1905, although some records list 1907 as his birth year. Pilgrim and his wife, Lula Haynes Black (1917-2007), were migrant crew leaders, and thus migrated to Upstate New York in the summers and back to their home in Sanford for the rest of the year. Pilgrim had to quit school at age11 in order to provide for his mother, originally working in a mill house until he was 18 years old. After declining a management position, he traveled to Wayne County in Upstate New York to pick cherries, apples, pears, and other crops. He broke a bone after falling from an apple tree his first year and decided to try farm labor on a potato farm in Red Creek, New York instead. Don Holdridge noticed Pilgrim's high rate of productivity and offered him a management position supervising up to 30 workers at once, which he accepted. Pilgrim also worked as a foreman in Sanford for Chase & Company for over 30 years.

PLAT SURVEY FOR PILGRIM BLACK
SANFORD, FLORIDA
DESCRIPTION
LOT 6, BLOCK 12, TIER H, E. R. TRAFFORD'S MAP OF THE TOWN OF SANFORD, ACCORDING TO THE PLAT THEREOF AS RECORDED IN PLAT BOOK 1, PAGES 56 THROUGH 64 OF THE PUBLIC RECORDS OF SEMINOLE COUNTY, FLORIDA.

SURVEYOR'S CERTIFICATE
THIS IS TO CERTIFY THAT THE UNDERSIGNED, BEING A REGISTERED LAND SURVEYOR, HAS COMPLETED THE LOCATION SURVEY OF THE ABOVE DESCRIBED PROPERTY AND THE PLAT HEREON DELIBEATED[?] IS A TRUE AND CORRECT REPRESENTATION OF THE SAME. 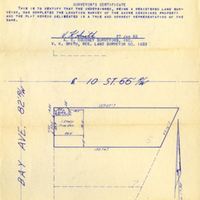