Lyman High School is a Seminole County Public School located in Longwood, Florida. In 1923, a board of trustees agreed to construct a new school to accommodate the growing population in the Longwood and Altamonte Springs area. Construction began at 1725 County Road 427 in 1924 and opened in September 1924 with Professor Howard Douglas as its first principal. Lyman School, as it was originally called, was named after Howard Charles Lyman, a citizen who was active in planning the school's establishment, but died a few days before construction began. In just two years, Lyman became an accredited junior high school and its campus had been expanded with six rooms. With W. J. Wells as principal, the Lyman School achieved accreditation through 12th grade in 1929. In 1963, the school was renamed Lyman High School when it became an accredited institution with Carlton D. Henley as principal. In 1966, Lyman High became integrated with both white and black students.

Original black and white photograph by Greyhound Staff of 1999, 1998.

Trophy time. Cadet Kyle Monroe accepts a trophy for Lyman's Color Guard at the Army State Drill Meet in Lakeland. This was just one of the many honors that Lyman's JROTC received.
(Photo: 1998) 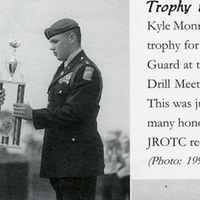