Lyman High School alumna Patricia Simpson. After graduating from Lyman, Simpson began working in a parachute factory in Casselberry, Florida. Shortly afterward, she joined Women Accepted for Volunteer Emergency Service (WAVES), completing a training course in parachute rigging at Lakehurst Naval Air Station in Jackson, New Jersey. Although the photograph is dated as 1941, it was likely taken sometime after 1942, as WAVES did not exist in that year.

WAVES, officially named the U.S. Naval Reserve (Women's Reserve), was established on July 30, 1942, as a division in the United States Navy for women. WAVES was officially part of the Navy and its members held thee same rank and ratings as their male counterparts, received the same pay, and were subject to the same standards for military discipline. Initially, WAVES members were stationed only in the continental U.S. and were barred from serving aboard combat ships or aircraft. Towards the end of World War II, members of WAVES were allowed to serve in a number of U.S. occupied locations, such as Hawaii. Most members of WAVES performed clerical work, but a number served in aviation, medicine, communications, intelligence, storekeeping, science, and technology.

On June 12, 1948, women were granted permanent status in the Armed Forces via the Women's Armed Services Integration Act. The V9 WAVE Officer Candidate Volunteer Program and V10 WAVE Enlisted Rating Volunteer Program were discontinued and renamed the W9 Women's Officer Training Program and W10 Women's Enlisted Training Program, respecitvely, because women were no longer volunteers as the WAVES acronym implied. Nonetheless, the acronym for WAVES was still used through the 1970s.

Woman at war. Patricia Simpson sends a smart salute home to her parents. After graduating from Lyman, she worked in the parachute factory in Casselberry before joining the WAVES. Once in the service she completed a course of training at parachute riggers school in Lakehurst Naval Air Station in New Jersey. (Photo: 1941) 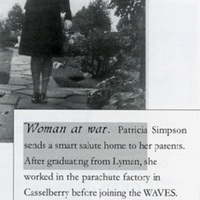