A portrait of Edgar Amos Love, which is housed at the Mary McLeod Bethune Foundation, located at 640 Dr. Mary McLeod Bethune Boulevard in Daytona Beach, Florida. Love was born in Harrisburg, Virginia, on September 10,1891. He earned four degrees including: a Bachelor of Arts degree in 1913 and a Bachelor of Divinity degree in 1916 from Howard University in Washington, D.C.; a Bachelor of Sacred Theology degree in 1918 from Boston University School of Theology in Boston, Massachusetts; and a Honorary Doctorate of Divinity degree from Morgan College in Baltimore, Maryland. He was a reverend in various cities in Maryland as well as a bishop of the Methodist Episcopal Church (MEC). Love is best known for being one of the founders of Omega Psi Phi Fraternity, Inc., the first African-American fraternity founded on a black campus. He also served as a chaplain in the United States Army during World War I. Following his honorable discharge, Love taught at Morgan College for two years before becoming a Methodist minister. In 1933, he became the District Superintendent of the Washington Conference of the Methodist Church and then led the Methodist Department of Negro Work in 1940.

Love also worked with Mary McLeod Bethune on the Methodist Federation for Social Services (MFSS) Executive Committee when Bethune began her four-year tenure in 1940. On June 22, 1952, Love was elected Bishop of the Central Conference of the Methodist Church, a segregated congregation in Baltimore. He continued serving as Bishop for 12 years, retired, and then returned from retirement from November 1966 to June 1967 to serve as the Bishop of the Atlantic Coast Area, which including Alabama, Florida, Georgia, and Mississippi. During his life, Bishop Love also served as a trustee for several black colleges and universities, as a member of the Maryland Inter-Racial Commission, and as a member of the National Association for the Advancement of Colored People (NAACP). He passed away on May 1, 1974, in Baltimore.

Copyright to this resource is held by the Mary McLeod Bethune Foundation and is provided here by RICHES of Central Florida for educational purposes only.

To a noble and courageous woman.
With sincerest regards,
Edgar Love 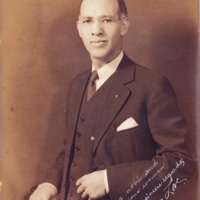