Property warranty deed certifying the transfer of land from A. M. and Julia A. Starbird to Ella Wall on January 26, 1924. The property transferred was the north half of the north half of Lot 27 Block J in the Town of Apopka, Florida. The deed was certified by the Circuit Court of the 17th Judicial Circuit of Orange Countya on December 8, 1924. Wall had later purchased the rest of Lot 27 Block J in 1928. The deed was notarized by W. G. Talton and witnessed by R. M. Moore.

Ella Wall (1874-1938) was an entrepreneur and businesswoman of Apopka who served as the inspiration for a character in Zora Neale Hurston's novel Mules and Men. Wall was born in Washington County, Pennsylvania, in 1874 and moved to Apopka as a widow. Throughout her lifetime, Wall purchased four parcels, of land. She operated an orange grove and also constructed small wooden buildings that she rented out to migrant workers. Wall was also a friend of Michael Gladden, Jr., the executor of the George W. Oden estates, until her death in 1938.

Collected by Carol E. Mundy between 1990 and 2009.
Purchased by the University of Central Florida Libraries, Special Collections and University Archives in 2009.

State of Florida,
County of Orange
On this 8th day of Dec. A. D. 1924 at 1:15 o'clock p.m. this instrument was filed for record, after being duly acknowledged and proven, I have recorded the same of pages 487 of Book 259 in the Public Records of said County.
IN WITNESS WHEREOF, I have hereunto set my hand and affixed the seal of the Circuit Court of the 17th Judicial Circuit of said State, in and for said County.
[?] Clerk
[?] D. C.

State of Florida
County of Orange
I HEREBY CERTIFY, That on this 26 day of January A. D. 1924 before me personally appeared A. M. Starbird and Julia A. Starbird to me known to be the persons described in and who executed the foregoing conveyance to Ella Wall and severally acknowledged the execution thereof to be their free act and deed for the uses and purposes therein mentioned; and the said Julia A. Starbird the wife of the said A. M. Starbird on a separate and private examination taken and made by and before me, and separately and apart from her said husband, did acknowledge that she made herself a party to the said Deed of Conveyance, for the purpose of renouncing, relinquishing and conveying all her right, title and interest, whether of dower or of separate property, statutory or equitable, in and to the lands therein described, and that she executed said deed freely and voluntarily and without any constraint, fear, apprehension or compulsion of or from her said husband.
WITNESS my signature and official seal at Apopka in the County of Orange and State of Florida the day and year last aforesaid.

TOGETHER with all the tenements, hereditaments and appurtenances, with every privilege, right title, interest and estate, dower and right of dower, reversion, remainder and easement thereto belonging or in anywise appertaining: TO HAVE AND TO HOLD the same in fee simple forever.
And the said parties of the first part do covenant with the said party of the second part that they are lawfully seized of the said premises, that they are free from all incumbrances and that they have good right and lawful authority to sell the same; and the said party of the first part does hereby fully warrant the title to said land, and will defend the same against the lawful claims of all persons whomsoever.
IN WITNESS THEREOF, the said parties of the first part have hereunto set their hands and seals the day and year above written. 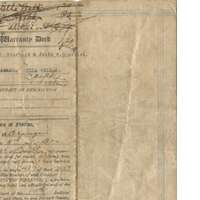