A document certifying Marie Jones Francis as a Lay-Midwife for the year of 1977. The certificate was issued by the Florida Department of Health and Rehabilitative Services Health Program Office and was signed by the Staff Director. The Governor and Secretary at the time of issuance were Reubin O'Donovan Askew and William J. Page, Jr., respectively.

Originally created by the Florida Department of Health and Rehabilitative Services and owned by Marie J. Francis.
Inherited by Daphne F. Humphrey.

Copyright to the resource is held by the Florida Department of Health and is provided here by RICHES of Central Florida for educational purposes only.

Id Entitled to Practice As A Lay-Midwide For the Year Ending December 31, 1977. License No. 24 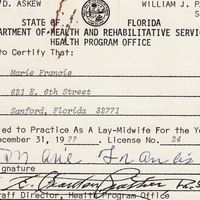