An academic paper written by William Arthur Bigham III (1982-) for a course at the State University of New York at Brockport on food and culture on December 19, 2011. Topics discussed in the paper include Bigham's interview with his mother, Patricia Ann Black (1956- ), about her experiences as the child of migrant workers; how migrant workers lived; the difference between education and race relations in the North and in the South; the logistics of working in the fields; and how the Federal government changed migrant work.

William Bigham III was born in Rochester and raised in Wayne County, New York. He began teaching microbiology and anatomy at the SUNY Brockport in 2013. He is the son of Patricia Black, the grandson of Pilgrim Black (1905-2002) and Lula Mae Haynes Black (1917-2007), and the great grandson of Harry Black (d. 1911) and Maggie Benjamin Black (ca. 1870-ca. 1934), who migrated to Sanford, Florida, from South Carolina in the 1800s. Bigham's grandparents, Pilgrim and Lula, were migrant crew leaders, and thus migrated to Upstate New York in the summers and back to their home in Sanford for the rest of the year.

Copyright to the resource is held by William Bigham III and is provided here by RICHES of Central Florida for educational purposes only. 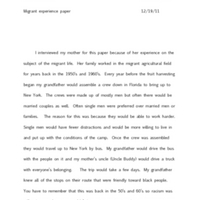