A table representing the vendors to rent stalls at the First Sanford State Farmers' State Market, where they were located, the number of stalls rented, and miscellaneous information. Vendors included B. E. Akin of Winston-Salem, North Carolina; the Sanford-Oviedo Truck Growers, Inc., a cooperative growing and shipping organization; the Brown Brothers; E. J. Cameron; B. R. Carroll; Chase and Company, a packer and shipper of citrus, celery, and other vegetables, as well as a manufacturer of crates, fertilizers, and insecticides; C. I. & M. Dingfelder, Abe Godsey; E. C. Harnage, a former officer of the Atlantic Coast Line Railway Company; W. E. Hathaway; Langford and Son; M. Moses, a grower and shipper of celery; A. B. Stevens, a producer of milk; Peter Thurston, a vegetable grower; William N. William, a dealer of tomatoes, avocados, limes, cucumbers, and peppers; Fred Zerrener; W. H. Britt; B. A. Howard, an executive committee member of the Florida Vegetable Growers' Association board; Stokes Seed Company, a packer and shipper of celery; H. C. Whelchel; W. B. Williams; and Ed Bullion, grower of limes, avocadoes, and vegetables. Bullion's broker, Edward Williams, was credited with the first official sale at the new farmers' market. H. J. Clause, broker for both the Sanford-Oviedo Truck Growers and for Peter Thurston, was credited with the second official sale.

The idea for the Sanford State Farmers' Market was devised by Fred Dorner and Gus Schmach, both members of the Seminole Agricultural Club. The Sanford Chamber of Commerce president Harry Papworth also contributed to the development of the market. The Federal Emergency Relief Administration (FERA) authorized construction plans on June 11, 1934. On June 20, 1934, the City of Sanford donated a portion of the Alex V. French properties to the Florida State Marketing Board, which selected the northwest corner of French Avenue and Thirteenth Street. The board approved the installation of telegraph and telephone equipment, as well as a three-pump filling station. The Sanford State Farmer's Market opened on December 18, 1934. By 1939, the Farmers' Market was bringing a total volume of business of $627,065.81. In 1941, business volume reached over $700,000. On April 4, 1957, a fire destroyed the building and caused damages estimated at $2.5 million. Reconstruction began almost immediately and the Farmers' Market was expected to re-open by the fall of 1957. In 1991, plans were created to restore, preserve, and convert the citrus packing house into a museum.

Originally created by Laura Cepero and published by RICHES of Central Florida. 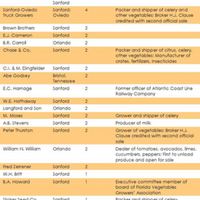