Western Union: A Hive of Service

Western Union: A Hive of Service

A magazine article about the Western Union Telegraph Company office located at 201 East First Street in Sanford, Florida, in 1926. According to the article, the telegraph business in Sanford was developing rapidly. The office's manager, L. Tharp, explained that in 1924, the local office only employed two day clerks, one day operator, one night operator, four messenger boys, and a manager. In 1926, when the article was published, the office employed three day operators, one night operator, four day clerks, one cashier, two night clerks, twelve messenger boys, one manager, and one linesman. The article also states that 36 lines lead out of Sanford, with half going to Tampa and half going to Jacksonville.

The Western Union Company was originally organized in 1851 under the name the New York and Mississippi Valley Printing Telegraph Company. In 1855, the company merged with the New York & Western Union Telegraph Company. Western Union grew rapidly, opening its first transcontinental telegraph in 1861. The first stock ticker was introduced in 1866 and standardized time service became available in 1870. In 1871, the company began its money transfer service. Although Western Union initially tried to participate in telephone services, it ultimately abandoned telephone communications when it lost a patent lawsuit with the Bell Telephone Company in 1879. Nonetheless, Western Union continued to develop new services for their customers, including the first charge card for consumers in 1914, teletypewriters in 1923, singing telegrams in 1933, intercity faxes in 1935, commercial intercity microwave communications in 1943, Telex services for customers in New York City in 1958, and Candygrams in the 1960s.

This Week in Sanford

Originally created and owned by This Week in Sanford.

This Week in Sanford, Vol. 02, No. 04, August 9, 1926. Central Florida Memory. http://digital.library.ucf.edu/cdm/ref/collection/CFM/id/120890.
"Western Union Chronology of Events - 1851-1995." Western Union Alumni. http://www.westernunionalumni.com/history.htm.
Coe, Lewis. The Telegraph: A History of Morse's Invention and Its Predecessors in the United States. Jefferson, N.C.: McFarland, 1993.
Wu, Tim. The Master Switch: The Rise and Fall of Information Empires. New York: Alfred A. Knopf, 2010.
Winston, Brian, and Brian Winston.Media Technology and Society: A History : from the Telegraph to the Internet. London: Routledge, 1998. 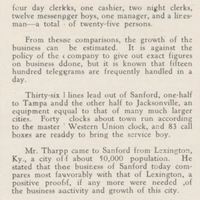