The Orlando Public Library, located at 101 East Central Boulevard in Downtown Orlando, Florida. Before there was a public library in Orlando, the local Sorosis Club ran a circulating library for the city. After years of running the library out of homes and clubhouses, the Sorosis Club joined the Board of Education in an effort to organize an official public library. In 1919, the Mayor of Orlando, Eugene Goodman Duckworth (1875-1959), secured the corner of Central Avenue and Rosalind Avenue as the site for the new library. A $73,983 contract was drafted and Murry S. King (1870-1925) was hired as the architect. On December 28, 1922, the cornerstone was laid and, on November 8, 1923, the Albertson Public Library opened with 20,000 books, which included the Sorosis Club's collection, as well as 12,000 books from Captain Charles L. Albertson, a retired police inspector from New York for whom the library was named.

The new library, considered
one of the finest in the
nation, was completed
in two stages: 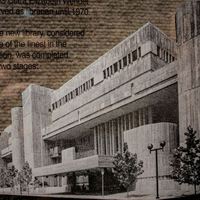