A letter from E. R. Trafford to Henry Shelton Sanford (1823-1891) dated February 8, 1884. In the letter, Trafford discussed land acquisition efforts and speculation. He described the efforts of land purchasers to buy available acreage from the state's Internal Improvement Fund lands at roughly 640 acres a day or 20,000 acres per month. The letter indicates the speculative nature of the land acquisition and the efforts of the investors to buy the lands at a discount. Trafford noted that "the proposed extension of the Railroad is not known here yet—though I fear the telegraph operator has dropped a hint. Property is very cheap here - but will take a jump when RR is known—I think it would pay you to invest one or two thousand in improved property here—this is undoubtedly the finest pine region of the State." Trafford also discussed some of the costs needed to clear and develop the land. 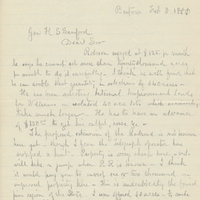