A letter from E. R. Trafford per William Beardall to Henry Shelton Sanford (1823-1891), dated February 13, 1884. In the letter, Trafford requested Sanford's signature for two enclosed deeds. The first deed was for J. C. Thorpe and D. B. Graves, who bought a five-acre plot from the Sanford Grant land for $250. The second deed was for George E. Rogers, who bought the lot with the Sanford Grove in St. Augustine, Florida, for $350. 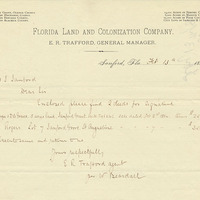