Letter from E. R. Trafford per William Beardall to Henry Shelton Sanford (1823-1891), dated February 6, 1884. In the letter, Trafford requested Sanford's signature for two enclosed deeds. The first deed was for Helen M. Randall, who bought several lots in the town of Sanford. The second deed was for Gustaf Lundquist, who bought two 5-acre lots in the "Swede settlement" of the Sanford Grant lands. 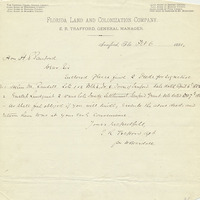