A letter from E. R. Trafford to Henry Shelton Sanford (1823-1891), dated February 25, 1884. In this brief letter, Trafford informed Sanford that several deeds had been received and that the town of Sanford, Florida had a concert to raise the needed funds for the completion of the Episcopal Church. 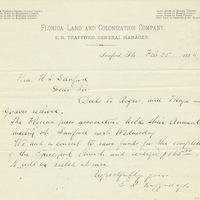