Paddle Steamer 'City of Jacksonville' at the Dock

Paddle Steamer 'City of Jacksonville' at the Dock

The DeBary Merchant Line dock and the City of Jacksonville steamboat in the 19th century. The dock was bought out by the Clyde Steamboat Company in 1889.

The Clyde Line was established by Thomas Clyde in 1844 and connected Philadelphia, Pennsylvania with other east coast ports. In 1872, the headquarters moved to New York and began connections with the Caribbean Islands. Charles W. Morse's Consolidated Steamship Lines purchased the company in 1907, only to collapse the following year. In 1911, the Atlantic, Gulf & West Indies Steamship Lines began operating Clyde Line, which continued to be used under that name until 1932 when the line was combined with the Mallory Line to form the Clyde-Mallory Line. The Clyde-Mallory Line operated until 1949 when it was sold to the Bull Line.

Copyright to this resource is held by the SState Library and Archives of Florida, and is provided here by RICHES of Central Florida for educational purposes only.

Sanford
Steamboats in the Hyacinths
"Steamboats"
When Steamboats Reigned in Florida
"Sanford: a Brief History" 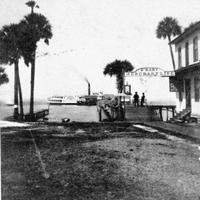