Aerial View of Downtown Sanford on the St. John's River

Aerial View of Downtown Sanford on the St. John's River

Downtown Sanford in the 1940s, including Memorial Park, City Hall, and the Municipal Zoo, just after being relocated from its original location. Veterans Memorial Park in Sanford, Florida. The bandshell is part of the original park design and construction that was completed in 1925. By 1927, a flagpole and fountain were dedicated in memory of World War I veterans. The park was renamed Veterans Memorial Park in 1973 when it was rededicated to the memory of veterans of all American wars.

The present-day Sanford area was originally inhabited by the Mayaca/Joroco natives by the time Europeans arrived. The tribe was decimated by war and disease by 1760 and was replaced by the Seminole Indians. In 1821, the United States acquired Florida from Spain and Americans began to settled in the state. Camp Monroe was established in the mid-1830s to defend the area against Seminoles during the Seminole Wars. In 1836, the United States Army built a road (present-day Mellonville Avenue) to a location called Camp Monroe during the Second Seminole War. Following an attack on February 8, 1837, the camp was renamed Fort Mellon in honor of the battle's only American casualty, Captain Charles Mellon. The town of Mellonville was founded nearby in 1842 by Daniel Stewart. When Florida became a state three years later, Mellonville became the county seat or Orange County, which was originally a portion of Mosquito County. Citrus was the first cash crop in the area and the first fruit packing plant was constructed in 1869. In 1870, a lawyer from Connecticut by the name of Henry Sanford purchased 12,548 acres of open land west of Mellonville. His vision was to make this new land a major port city, both railway and by water. Sitting on Lake Monroe, and the head of the St. Johns River, the city of Sanford earned the nickname of “The Gate City of South Florida.” Sanford became not only a transportation hub, but a leading citrus industry in Florida, and eventually globally. The Great Fire of 1887 devastated the city, which also suffered from a statewide epidemic of yellow fever the following year. The citrus industry flourished until the Great Freezes of 1894 and 1895, causing planters to begin growing celery in 1896 as an alternative. Celery replaced citrus as the city's cash crop and Sanford was nicknamed "Celery City." In 1913, Sanford became the county seat of Seminole County, once part of Orange County. Agriculture dominated the region until Walt Disney World opened in October of 1971, effectively shifting the Central Florida economy towards tourism and residential development.

Copyright to this resource is held by the State Library and Archives of Florida and is provided here by RICHES of Central Florida for educational purposes only. 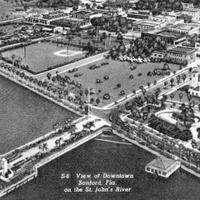