Copyright to this resource is held by the State Library and Archives of Florida, and is provided here by RICHES of Central Florida for educational purposes only. 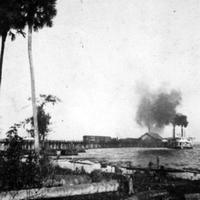