Advertisement for the Anchor Line of the Henderson Brothers steamship company. The Anchor Line first appeared in advertisements in 1852 for N and R Handyside and Company. Overseen by Captain Thomas Henderson, who first proposed a line between Scotland and America, the Anchor Line began steamship service from Glasgow, Scotland, to New York City, New York, in 1856. At the same time, Henderson formed a partnership with the Handyside brothers, thus creating Handyside and Henderson. Though the company started slowly, by 1866 it had expanded and was offering regular sailings to the Mediterranean, Calcutta, Bombay, and Scandinavia, as well as its transatlantic line to the United States.

At its height, the Anchor Line became a major carrier of European emigrants traveling to the United States. This particular advertisement advertises a line between Scotland, or Scotia, and several Scandinavian cities, including Gothenburg, Sweden, and Christianssand, Norway. It is unclear what connection the Anchor Line had to Henry Shelton Sanford, though it is possible that the Anchor Line was the shipping company used to transport a group of Swedish immigrants hired by Sanford to provide manual labor on his Florida properties, particularly his two citrus groves, St. Gertrude's and Belair. This possibility is made more plausible by the fact that, as the advertisement indicated, the company had an office located in Gothenburg, a major port city linked to sea-based shipping and travel. In May of 1871, Sanford brought 33 migrants from Sweden to work in Sanford. The Swedish workers, 26 men and 7 women, cost Sanford $75 each. According to the work contracts, Sanford was to provide housing and rations for each worker as well as a parcel of land for those satisfactorily completing their one-year contracts, Sanford hired an additional 20 Swedes later that year, in November of 1871.

Originally created by Henderson Brothers.
Donated to the Connecticut Historical Society after 1901.
Loaned to the Tennessee State Library and Archives for processing until June 1, 1960.
Acquired by the General Henry S. Sanford Memorial Library, Sanford Museum in 1960. 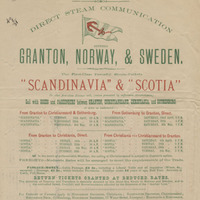