A letter from Edwyn Sandys Dawes (1838-1903) to Henry Shelton Sanford (1823-1891), dated December 8, 1881. In the letter, Dawes noted that he had received several letters from Sanford that were addressed to the board of the Florida Land and Colonization Company (FLCC); he had decided to hold onto the letters and instead asked Sanford "to reconsider whether or not they should be put in." Dawes warned about the consequences of disseminating Sanford's letters, noting that, "if put forward they are certain to create an estrangement between yourself and the other members of the Board." The contents of Sanford's original letters contained complaints about the company's agents in Florida, Gerald Waller and G. A. Thompson. Later in the letter, Dawes pointed to disagreements in business strategy between the board and Sanford. Knowing of Sanford's limited financial capabilities, Dawes adds that, "we would be willing to part with all shares and retire" if Sanford were able to find new suitors who would be able to pay for their shares and replace them. The letter reflects the often tense relationship between Sanford and the British board members of the FLCC.

Dawes was one of the founding partners of Gray Dawes and Company, a London-based company founded in 1865 by business partners Archie Gray and Edwyn Sandys Dawes (1838-1903). Located at 13 Austin Friars in London, England, the company was focused, at least initially, on maritime insurance. By the mid-1870s, the company had also expanded its operations into shipping, overseeing a fleet of steamships that circulated within a trade network including London, Calcutta, Madras, and elsewhere. The company was closely linked to the Scottish shipping titan, Sir William MacKinnon (1823-1893). Gray was Mackinnon's nephew. Dawes, meanwhile, went on to become a close and trusted business partner to MacKinnon. As such, the firm became a useful means for MacKinnon to reward his friends and business associates. The company availed insurance accounts to these select individuals, accounts that could be used as a source of credit to be paid at a later date. The company became associated with Henry Shelton Sanford thanks to the mutual connection to MacKinnon. In 1880, MacKinnon lent Sanford, who was faced at the time with financial difficulties, some £8,000 to facilitate the founding of a Florida land investment company. The money offered by MacKinnon was in fact loaned to Sanford by Gray Dawes and Company. Additionally, at the behest of MacKinnon, both Gray and Dawes became reluctant subscribers to Sanford’s land investment scheme, the Florida Land and Colonization Company (FLCC). 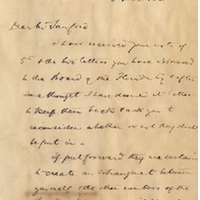