Patricia Ann Black next to the Heritage Marker #3 of the Georgetown Pathways to History Project, which was developed by the Georgetown Heritage Advisory Committee with assistance from the Sanford Museum and Sanford Historical Society. Georgetown was established by the city's founder, Henry Shelton Sanford, as a suburb for African-American residents in the 1870s. The neighborhood spans along Sanford Avenue, with its commercial district between First Street and Fifth Street and its historic district between Seventh Street and Tenth Street. Though originally much smaller, Georgetown spanned to its present boundaries from East Second Street to Celery Avenue and from Sanford Avenue to Mellonville Avenue. Georgetown thrived at its height from circa 1880 to 1940, particularly in agriculture and transportation.

Black was the daughter of Pilgrim Black (1905-2002) and Lula Mae Haynes Black (1917-2007), who got married in 1937. Patricia was born August 31, 1956, and grew up at the end of East Tenth Street in Sanford, Florida. She attended Hopper Elementary through sixth grade, Lakeview Middle School for seventh grade, Sanford Junior High School for eighth grade, Crooms High School for ninth grade, and Seminole High School through twelfth grade. She also attended school in the North Rose-Wolcott district each year while in Upsstate New York. During fourth grade, integration began and parents were given the choice to have their children to attend other schools, but Patricia chose to continue attending an all-black school until she entered seventh grade in 1968 and began attending integrated schools.

Copyright to this resource is held by Charmion Le'Antwinetta Holt and is provided here by RICHES of Central Florida for educational purposes only. 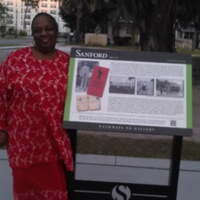