Excerpt from a Mayfair Inn brochure detailing the attractions and luxuries of the resort in the 1950s. Originally named after the Sanford Mayor and president of Seminole County Bank, construction of the Forrest Lake Hotel began in 1916. Local architect Elton J. Moughton designed the hotel. In 1925, Hotel Forrest Lake opened and became a popular destination for tourists visiting Sanford. By 1929, the hotel closed after the stock market crash and the downfall of Florida's tourism and real estate boom. William E. Kirchhoff leased the building in 1934 and the hotel reopened in 1935 with the new name Mayfair Hotel. Under Kirchhoff's ownership, the Mayfair Hotel became known as one of the finest hotels in the South. Kirchhoff sold the hotel in 1948 to Horace Stoneham, owner of the New York Giants. Stoneham then sold the building to the Bernard McFadden Foundation. After the Naval Air Station Sanford acquired $1.3 million to fund the construction of a naval academy in 1963, the Foundation made significant alterations to the building to house students from the Sanford Naval Academy. The Foundation later sold the building to the New Tribes Mission in 1977. The New Tribes Mission's goal is to reach tribes who have no access to the Gospel through translated publications and missionary work.

Originally created and owned by the Mayfair Inn.

Each of the Mayfair Inn’s 150 rooms is beautifully furnished, equipped with sleep-inviting innerspring mattresses, and has its own private bath. Service at the Mayfair Inn is exceptionally deft and smooth, and the meals are unusually delicious.
You might expect to pay $35 or even $50 a day at a Florida hotel offering such comfort and luxury and so many sports advantages.
But the New York Giants want you to have one of the greatest bargains ever offered in Florida vacation enjoyment! . . . Rates at the Mayfair Inn, WITH ALL MEALS, are only ten dollars a day for one person --- and eighteen dollars a day for two people in one room.
These exceedingly low rates also entitle you to FREE USE of the golf course, the putting green, the adults’ and children’s swimming pools, the tennis and badminton courts, the archery range and all other sports facilities on the grounds of the Mayfair Inn.
The Mayfair Inn is open the year around for your vacation delight. Please write well in advance for your reservation, mentioning your proposed date of arrival and probable length of visit. Address your letter to: Manager, Mayfair Inn, Sanford, Florida. 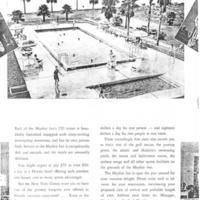