The Naval Air Station (NAS) Sanford was commissioned on November 3, 1942 as a naval aviation training facility during World War II. The Navy continued to train pilots at NAS Sanford throughout the Korean and Vietnam Wars. NAS Sanford was temporarily decommissioned after World War II in 1946 and then recommissioned as the Naval Auxiliary Air Station (NAAS) Sanford in 1950 due to the outbreak of the Korean War and the ongoing Cold War. Soon afterward, the station was renamed NAS Sanford and redesignated as a full naval air station. On February 6, 1959, NAS Sanford was dedicated as Ramey Field in honor of Lieutenant Commander Robert W. Ramey. In 1968, due to lack of funding caused by the Vietnam War, Congress directed the closure of NAS Sanford. The City of Sanford assumed authority over the former NAS Sanford facility the year after it closed and renamed it the Sanford Airport, which was managed by Commander J. S. "Red" Cleveland. The airport underwent various name changes over the next several decades: Sanford Regional Airport, Central Florida Regional Airport, Orlando-Sanford Regional Airport, and its current name, Orlando-Sanford International Airport. Throughout the 1980s and 1990s, several Naval buildings were demolished and new buildings were constructed. 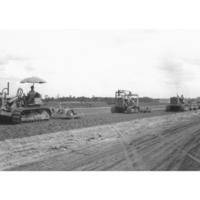