A legal document for the dedication of five acres land for the Boston Hill Cemetery, an African-American cemetery located at 199 Boston Cemetery Road in Oviedo, Florida. The dedication deed was signed by Prince Butler Boston and E. Garvin, who were representing the Board of Trustees of the Boston Cemetery, on October 12, 1926. The document was approved by N. E. Douglass, the Seminole County Clerk, on November 3, and was then approved by A. M. Weeks, the Clerk of the Circuit Court, the following day, The deed was then notarized on June 6, 1927, and approved by surveyor Allen H. Stone on November 4, 1928.

Prince Butler Boston was the son of a Georgia slave owner, Dr. Alexander Atkinson, who moved to Central Florida in 1885, when he was 14 years old. After the citrus freeze during the 1890s, Atkinson abandoned citrus growing and migrated to Miami, leaving most his land to his son. Boston was a member of Antioch Missionary Baptist Church for nearly 61 years, beginning in 1886 until his death in 1947. He was ordained as a deacon in the church and also became the superintendent of the Sunday school. Once membership in the church began to grow, he designed a second choir stand and two additional classrooms.

Copyright to this resource is held by Ida Boston and is provided here by RICHES of Central Florida for educational purposes only. 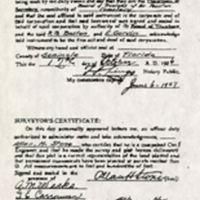