The Tropics, a Tampa-based band, taken on May 7, 1999, for their 30 year reunion show at the Coliseum, located at 535 Fourth Avenue North in St. Petersburg, Florida. The show was a benefit for All Children's Hospital. 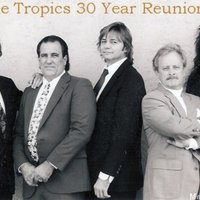