A newspaper photograph from The Tampa Times on January 4, 1968, describing a concert with the bands The Tropics and The Rascals. In this photograph, a large banner hangs from the upper level that reads, "WORLD TEENAGE SHOW 1966 TOP CHAMPIONS," and "INTERNATIONAL BATTLE OF THE BANDS WINNERS." 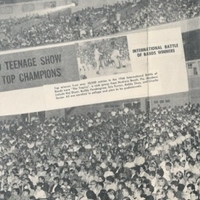