Letter from Chiles to Brashears and Wainright (February 13, 1981)

A letter from Senator Lawton Mainor Chiles, Jr. to Mrs. Brashears and Herly Mae Wainright dated February 13, 1981. In the letter, Senator Chiles declines an invitation to attend the 75th anniversary celebration of the Oviedo Woman's Club (OWC), which was founded in 1906 as the Oviedo Magazine Club by seven charter members: H. B. McCall, Edith Meade, Georgia Lee Wheeler, Lillian Lee Lawton, Mattie Aulin Wheeler, Milcah Yonge, and Mary King. The first clubhouse was constructed in 1914 and also served as Oviedo's first library. In 1916, the club joined the Florida Federation of Women's Clubs (FFWC) and officially changed its name to the Oviedo Woman's Club. In 1923, the woman's club was federated under the umbrella of the General Federation of Woman's Clubs (GFWC). A new clubhouse was built in 1961 on property donated by R. L. Croom, a former member, which is located at 414 King Street. The Oviedo Woman's Club is involved in many civic projects, including the annual Great Day in the Country Arts and Crafts Festival, the Spring Fundraiser, Tasting Luncheons, and Celebrate Spring Teas.

Chiles is best known for serving as the 41st Governor of Florida from 1991 to 1998. A veteran of the Korean War, Chiles attend law school in his home state of Florida. He began practicing in law in 1955 and was elected to the Florida House of Representatives in 1958. In 1970, Chiles defeated the incumbent in his bid for the U.S. Senate. He retired from politics in 1989, but was convinced to run for Governor in 1990. Chiles again beat his incumbent. As Governor, his legacy consisted of health care reform, hurricane recovery from Hurricane Andrew, and education reforms. Chiles died of a heart attack while in office. 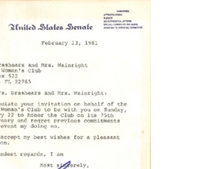