A newspaper article written by Ben Wheeler and published by The Oviedo Voice in February of 2006. The article describes the history of the Oviedo Woman's Club (OWC) and also provides a brief history of woman's clubs in Florida. According to the article, the Green Cove Springs' Village Improvement Association was formed as the first woman's club in Florida on February 20, 1883.

Originally created by Ben Wheeler and published by The Oviedo Voice.

Copyright to this resource is held by The Oviedo Voice and is provided here by RICHES of Central Florida for educational purposes only. 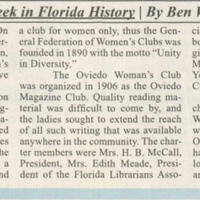