An official summary report form for General Federation of Woman's Clubs (GFWC)/Sears, Roebuck, and Company's 1974-1976 Community Improvement Program. This form was completed by Mrs. John W. Evans, President of the Oviedo Woman's Club (OWC). The form summarizes the club's Library Services Project and Rescue Van Project. According to the form, through the efforts of OWC, Oviedo residents were able to gain access to unlimited, free use of complete library services. The form also summarizes the club's efforts to raise money in order to replace a rescue van that was stolen and burned. 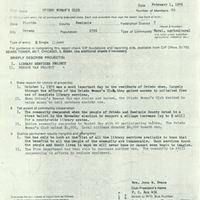