A letter of correspondence from Thomas F. House to William Henry Coe (1824-1879), the founder of Glencoe, Florida, dated September 2, 1878. In the letter, House, who is the Collector of Customs for the District of St. Augustine, informs Coe that in the event that the current Deputy Collector of Customs accepts an appointment to another position, the will consider Coe's application as a replacement. On April 10, 1879, Coe was officially appointed the position. the was responsible for collecting import duties on foreign goods that entered the United States through the port at New Smyrna until his death on October 23. Shortly thereafter, his son, Captain Charles Henry Coe, was appointed to the position.

Due to poor health, Coe moved with his wife and children from Connecticut to Jacksonville in 1874 and established an orange grove the following year four miles west of New Smyrna, an area that would later become Glencoe. In 1877, Coe became an editor for The Florida Star, a newspaper founded by his son, Captain Charles Henry Coe (1856-1954). In April of 1879, Coe was appointed Deputy Collector of Customs for the port at New Smyrna. Just a few months later, on October 23, Coe died of silicosis, likely a result of his work as a copper miner in Illinois during the 1840s. Coe is buried in at Hawks Park Cemetery in Edgewater. 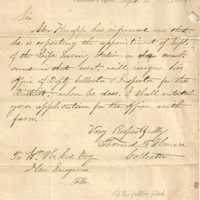