The first Westinghouse industrial gas turbine installation. It was installed by Mississippi River Fuel Corporation at Wilmar, Arkansas, and started operation in March of 1949. The turbine was used for a mechanical drive application (possibly a fuel-gas compressor) and rated at approximately 1800 hp (1340 kW). The turbine had dual-fuel capability, meaning that it could burn with distillate oil or natural gas. The unit ran in continuous service for many years before being retired later in the 20th century. There were also four other W21 units installed during the 1950s.

Originally called the Westinghouse Electric Company, George Westinghouse (1846-1914) founded his manufacturing company in Pittsburgh, Pennsylvania, on January 8, 1886. In 1889, he renamed his business the The Westinghouse Electric and Manufacturing Company. Westinghouse's primary products include turbines, generators, motors and switchgear related to the generation, transmission, and use of electricity. The company changed its name to Westinghouse Electric Corporation in 1945. The company relocated its Steam Turbine Generator Divisions from Pennsylvania (turbines from Lester and generators from Pittsburgh) to Orlando, Florida, beginning in 1981. The Power Generation Business Unit (PGBU) building was located in The Quadrangle, at 4400 Alafaya Trail. Originally, Westinghouse had purchased a large plot of land for future development that extended westward from Alafaya Trail to Rouse Road. The original headquarters was located on several acres of that land parcel close to Alafaya Trail. As the PGBU grew in size, other buildings were rented and then, after PGBU was sold to Siemens Corporation, additional buildings were added to the complex. In 1994, after a major management shuffling and commitment to change from an industrial manufacturing company to primarily a broadcasting/communications company, Westinghouse bought CBS network. It then changed its name to the CBS Corporation. 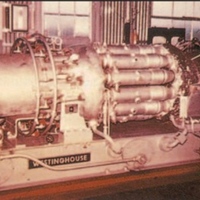