A postcard depicting the gateway and portcullis of the Tower of London's Bloody Tower in London, England. The Tower of London was established in 1066 by William I of England, popularly known as William the Conqueror and sometimes known as William the Bastard, to keep hostile Londoners at bay. The Bloody Tower is located in the middle of the castle's three wards, the inner ward. It was constructed during Richard I of England's (popularly known as Richard the Lionheart) reign in the early 1220s. The Bloody Tower was meant to control the main river entrance to the castle, but after construction of an outer defensive wall in 1280, it became landlocked. It was then used as the main conduit between the outer and innermost wards of the Tower of London. In the mid-16th century, the tower became known as the Bloody Tower because it housed the Princes, Edward V and Richard of Shrewsbury, Duke of York. The princes disappeared from the tower and were never found. 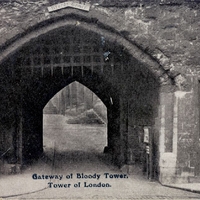